Moody Focuses On Qld Bring Me the Maid 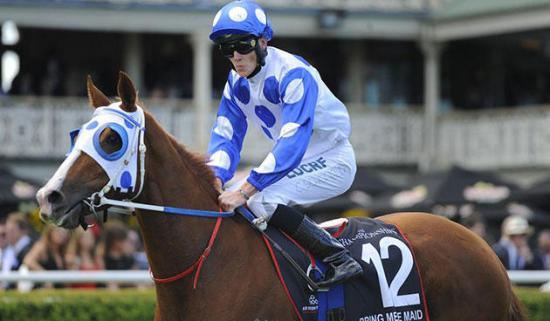 Fresh from his red-letter day at Randwick on Saturday,Peter Moodyhas turned his attention to the impending Group 1 races at carnivals in Brisbane and Adelaide.

The champion trainer, who prepared a Group 1 double withDissidentandPasadena Girlat Randwick, will be a player at both carnivals, which offer a host of Group 1s up until the final Group 1 of the season, the Tattersall’s Tiara, at Doomben on 20 June.

It is a filly who could find herself in that $500,000 event for fillies and mares that Moody has highest hopes of adding to his Group 1 tally of 51.

Bring Me The Maidremains at his Randwick stable, but last year’s Golden Slipper placegetter is likely to head north in preference to Adelaide given the range of options.

“She can go through the weight-for-age path of the BTC Cup and Doomben 10,000 into a Stradbroke or we can come back to fillies and mares’ races, which there’s a good variety of up there, or we can even come back to 3YO races,” Moody toldRacing.com’s Correct Weight.

“So there’s a lot of options for her there, probably more so than Adelaide where there’s only a couple. That leans me to thinking that she’ll head that way.”

Bring Me The Maid has had just one start this campaign, for a close second toDelectationin the $500,000 Group 2 Arrowfield 3YO Sprint (1200m) at Randwick on 11 April.

The Queensland carnival ramps up next Saturday at the Gold Coast, where Moody will haveInauguration,Upham,Imperial LassandUlmannrun in three-year-old events, whileWish Come TrueandSir John Hawkwoodwill continue their progression to the Group 2 Brisbane Cup (2400m).

Moody said his leading hope of a Group 1 in Adelaide appeared to beTriple Gold, who will get to the $500,000 South Australian Derby (2500m) on 9 May via a race against the older horses at Cranbourne this Friday night.

“He won’t have one of the lead-ups there, I’m actually going to run in a benchmark race at Cranbourne on Friday night so he only has the one trip to Adelaide,” Moody said