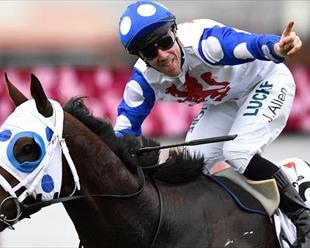 Bookmakers around the country were left reeling after Mr Quickie landed a massive betting plunge in a drama-filled Queensland Derby at Eagle Farm on Saturday.

Mr Quickie was backed in from $5 to start the $2.80 favourite, but punters were made to wait for their money.  Mr Quickie was superior on the track but had to keep the race in the stewards room after runner-up  Vow And Declare’s jockey Damien Oliver protested over alleged interference in the final 300m.

In a dramatic finish to the three-year-old classic,  Lord Arthur clipped heels and fell. His jockey, Corey Brown, was taken to hospital with suspected fractures to his back but could move his arms and legs. Lord Arthur was unable to be saved. John Allen, who rode Mr Quickie, felt he was on the strongest stayer but admitted he was a little wayward in the straight when he found the front.

“He was running around a lot but he is so strong. I always thought he had more to give,” Allen said. ‘We got hampered at the start and a little further back than I thought.

‘I thought it might be too big a task to win from where he was, but with the good barrier we were just able to creep a little closer.

‘I had to take a few risks. There were a couple of tight gaps we had to thread, but he accelerated away from them when he got there and had a little bit of a look around before knuckling down. ‘He took his mind off the job and drifted out a couple of lengths late, but by that stage he was switched off and if anything came at us he would have found again.’

Allen was surprised at the protest and told stewards he thought it was “ambitious”.

Oliver claim his momentum on Vow Declare was stopped when Allen made his run at the 300m mark and that his horse ‘is a momentum horse and was cutting into the margin at the end’.

Stewards dismissed the protest, saying that the three-quarters of a length margin between Mr Quickie and Vow And Declare ($26) was enough for him to hold the race. Aliferous ($14) was other 1¼ lengths away in third after coming from last on the turn.

Mr Quickie gave Phillip Stokes his first group 1 from his new base at Pakenham after he went close when third in the South Australian Derby last month.

‘Johnny  gave him a great ride. We stuck with him and he wove his magic today,’ Stokes said ‘He got him out just at the right time and for his age, gee, this horse can stay. His record speaks for itself. He’s remarkable.

‘Big thrill to get a win for Rosemont, Peter Moody and all the boys involved in this horse.

‘The ultimate credit has to go to the horse. We flew him up here after a tough South Australian Derby in the wet and he’s done the job.

‘It’s been a busy time for the stable moving from Adelaide to Melbourne, but to get a win like this while making that transition is a real boost.