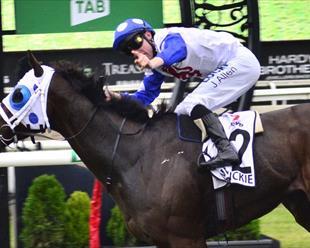 Mr Quickie survived a protest in claiming an incident-marred $600,000 Group 1 Queensland Derby (2400m) at Eagle Farm on Saturday. Trained by Phillip Stokes and ridden by John Allen, Mr Quickie settled in the second half of the field and relished the solid mid-race tempo.

Mr Quickie travelled strongly in behind a wall of horses around the home turn and only required clear running to play a role in the finish. Allen pushed his way into the clear underneath Vow And Declare with 350 metres left and simultaneously, in an unrelated incident, Lord Arthur was tightened for room and fell.

Mr Quickie ($2.80 favourite) and Vow And Declare ($26) fought out the finish over the final 200m, with Mr Quickie first past the post by three-quarters of a length. Damien Oliver, rider of Vow And Declare, lodged a protest for interference in the straight, which was dismissed by stewards. Luckless G1 Queensland Oaks (2200m) fifth placegetter Aliferous ($13) finished third, a further 1.3 lengths away.

‘We got hampered at the start and I thought it might be too big a task to win from where he was, but with the good barrier we were just able to creep a little closer,’ Allen said.

‘I had to take a few risks, there were a couple of tight gaps we had to thread, but he accelerated away from them when he got there and had a little bit of a look around before knuckling down.

‘He took his mind off the job and drifted out a couple of lengths late, but by that stage he was switched off and if anything came at us he would have found again.’

Stokes praised Allen’s winning ride, his fifth Group 1 victory of the season, and reflected on Mr Quickie’s three-year-old career, which started with Darren Weir before joining Stokes after Weir’s disqualification in early February. Mr Quickie has won nine of his 13 starts and missed a place just once, finishing fourth.

‘For his age gee this horse can stay, his record speaks for itself he’s remarkable,’ Stokes said.

‘The ultimate credit has to go to the horse, we flew him up here after a tough South Australian Derby in the wet and he’s done the job.

‘It’s a big thrill to get a win for Rosemont, Peter Moody and all the boys involved in this horse.

‘It’s been a busy time for the stable moving from Adelaide to Melbourne, but to get a win like this while making that transition is a real boost.’