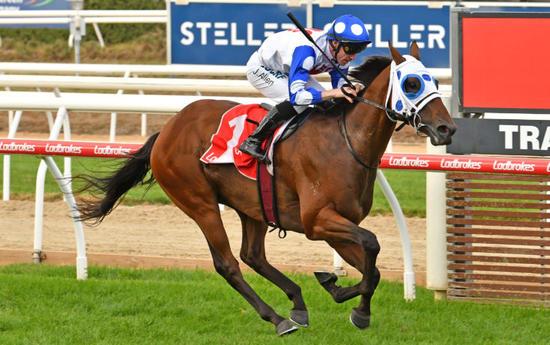 Mr Quickie has extended his winning sequence to six and seven wins from nine career starts, overcoming a difficult run to claim the Mornington Guineas on Saturday.

The $1.80 favourite under John Allen raced away to a two-length win on Saturday to continue his march towards the South Australian Derby

‘That was a big win,’ Stokes said.

‘He went back, they steadied the tempo, he got pulling a bit, he was wide, so to win like that it was a good win.

‘I thought he was vulnerable today at this track, so he defied it and I think he’s very promising.’

Stokes has planned a campaign aimed at May’s South Australian Derby at Morphettville.

The trainer says the gelding is a clean-winded galloper who’ll head to Caulfield on April 27 to run in the VOBIS Gold Heath as his final lead up.

‘He doesn’t go out to break any records and we don’t ask him to.

‘I’m just happy to be able to train him and look forward to his next run before he goes to the Derby.