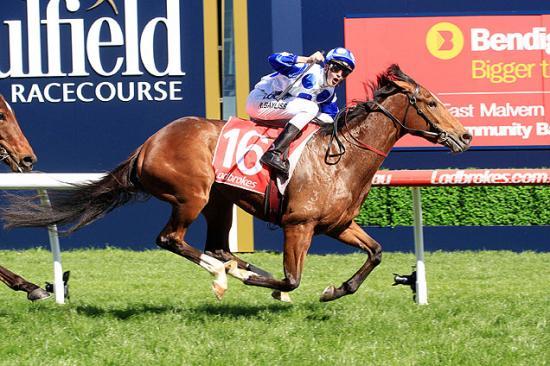 A filly bought in New Zealand as an Oaks prospect could give her syndicator and young rider a breakthrough at the elite level in the Thousand Guineas at Caulfield.

Harlow Gold is the current VRC Oaks favourite but will first chase her third-straight win this spring in Saturday’s Thousand Guineas at Caulfield for which she is on the fourth line of betting.

Wylie Dalziel, whose Wylie Dalziel Roy Higgins Racing was formed with the late champion jockey in 2009, victory in Saturday’s race would be his first with his best result so far Bring Me The Maid’s third in the 2014 Golden Slipper.

Connections of the David and Ben Hayes and Tom Dabernig-trained Harlow Gold have stuck solid with apprentice Regan Bayliss.

“He deserves a shot at a Group One, just like we do.

“He’ll give her a good ride and he’ll be pumped if she wins.”

Harlow Gold was bought at the Karaka sales in New Zealand last year.

“I probably had room for about four or five to be able to syndicate and this was a filly that we looked at and straight away got a good vibe about her,” Dalziel said.

“We took a punt on (sire) Tavistock and just said ‘there’s no budget on her’. She was just one of those horses that grabs you and you really want to take home with you.

Harlow Gold won over 1600m at Caulfield last start, beating the colts and geldings, and Dalziel said that form had been franked by runner-up Rocketeer almost winning the UCI Stakes at Flemington on Sunday.

While Dalziel said Harlow Gold was probably more of an Oaks filly, he said the fact she had already won over 1600m was a plus.

“If we can win a Group One Thousand Guineas over 1600, we’ll be pretty excited going forward for the Oaks,” he said.