Henpecker makes it two wins from her last three! 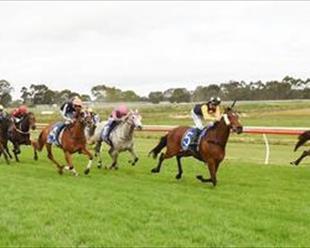 It doesn’t matter how far you win buy or how much they cost! A win is a win!

HENPECKER recorded her third win from just ten career starts when a narrow but impressive winner over 2200m at Hamilton on Friday 6 October.  A winner now from 1400m – 2220m this staying daughter of Rip Van Winkle is improving with each preparation and on a trying Hamilton surface she did all the hard work on what seemed the slowest part of the track close to the inside rail!

A well judged and strong ride from underrated jockey Anthony Boyd was the difference on Friday with just a nose to separate Henpecker and second place getter and race favourite Baja Moon.

It was Henpecker’s second win at her last three starts and she is a mare Wylie Dalziel believes will continue to thrive on the softer tracks and over a staying trip.

‘She was an outstanding type at the New Zealand Sales a couple of years ago and we bought her for just $50,000’ Said Wylie after the win.

‘Like most staying mares, particularly out of NZ, she has taken some time. But she is lightly raced and always shown a lot of promise’.

‘She likes the sting out and needs at least a mile to show her best, however I think she is city class at a minimum so hopefully she can continue to improve with racing’

A huge thanks to Ciaron MaherCiaron Maher Racing ,Aaron Purcell , David Eustace and all the team for a great training effort. Dalziel Racing would also like to acknowledge Matthew Williams Racing and his team at Warnambool for all the work that went in to managing the mare. Thanks also to Anthony Boyd for a well earned ride and for keeping her nose in front on the line!