Junction Makes It Another 2yo Winner for Dalziel Racing 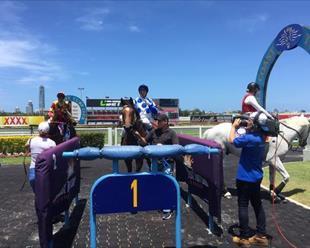 Junction made a winning debut when scoring in impressive fashion at the Gold Coast on Wednesday the 25th of January. The son of Real Saga overcame some inexperience in running to score by just under a length, finishing far too strongly for his opposition.

After an ultra impressive trial win on the same track earlier in January the son of Real Saga was sent out as an odds on favourite on debut. The win provided Dalziel Racing with their second 2yo winner nationally for the season, after purchasing 18 yearlings across Australasia in 2016.  Remarkably, today’s winner was just the third 2yo to step out so far this season for Dalziel Racing, with two winners in JUNCTION and PHELPS GLORY (city winner on debut) and AMERICAN GENIUS who has run third in all three of his starts including twice at Flemington (Listed) and in the Magic Millions Clockwise at Ballarat!

Trainer Bryan Guy explained after the race that he was a bit nervous approaching the home turn as the gelding seemed to get a little lost but upon straightening he flattened out and put his mind on the job to quickly put pay to his rivals.

“it was a pleasing debut as he has always shown above average ability from day one and it was just a matter of putting a program together that will ultimately culminate in a run in the Inglis Classic race early next month, so with winning today he should qualify”.

“this horse has great upside as he looks like he will develop into a nice middle distance horse and if he shows as much improvement between today’s win and his next start as he did between his trial last week and today then he should race well in Sydney”.

JUNCTION WINS ON DEBUT from Dalziel Racing on Vimeo.