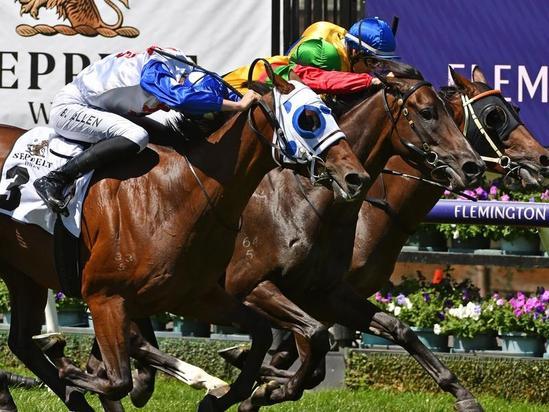 Former Adelaide trainer Phillip Stokes, who only recently relocated to a new training complex at Pakenham, did not have much time to savour the victory of Mr Quickie in the Seppelt’s Wine Plate at Flemington on Saturday.

With bushfires burning fiercely in the state’s east, Stokes had to dash back to his stables to ensure there was no danger of the property being threatened by the searing heat and flames.

‘‘We have evacuated all the horses from our farm. It’s OK at the moment, I will be getting back very quickly,’’ Stokes said after Mr Quickie won the race that jumped at 1pm.

‘‘I really feel for Jamie Bayliss and his family. They had to evacuate last night and they don’t even know if they have got a house, but he was there riding trackwork this morning.’’

Mr Quickie was another ex-Darren Weir horse to score for a new trainer, but Ben Allen (who later won the group 2 Blamey Stakes on Fifty Stars) was a familiar partner, having won on the horse at his last start at Pakenham in December.

Stokes believes there is plenty of upside with the son of Shamus Award.

‘‘I am still learning my way with the horse – he had been doing everything well at home,’’ Stokes said. ‘‘He’s on track for the SA Derby, it’s very exciting. He wants a lot further than 1400 metres, but he’s come back in great order.’’

Mr Quickie prevails at Flemington! from Dalziel Racing on Vimeo.