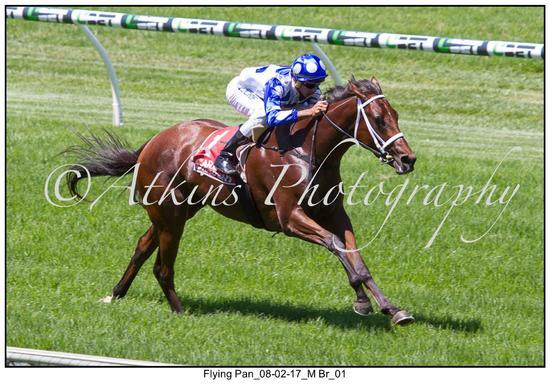 Not much went right at her first two starts but today the heavens opened and FLYING PAN burst away for a big maiden win over 1400m at Murray Bridge.

Trained by our South Australian horseman Phillip Stokes and ridden by stable jockey Dom Tourneur the promising 3yo daughter of Helmet took a few strides to find her rhythm as they left the gates, before mustering good speed to settle just off midfield in the field on 9. She always travelled well for Dom and the pair started to creep in to the race as the pressure went on 500m from home, however with a wall in front of him Dom was sweating on a run as they swung in to the straight. No sooner was he in traffic and the field opened right up as Dom angled away from the inside to find himself in clear running and down the middle of the track. From there it was race over as FLYING PAN stormed away for a convincing 3.7L win.

The filly looks to have a bight future ahead and is capable of working through the grades and getting back to city class soon. Trainer Phillip Stokes and Wylie Dalziel believe Flying Pan will improve again off whatever she does this time in.

‘She is only in her second race preparation and today was just her third start. There is still a lot of upside with this filly’ Said an excited Wylie Dalziel after the race today.

‘Phillip has a bit of an opinion of her so we’ll see how far she can progress. She certainly looks up to city class and if we could get some black type with her than she becomes a valuable broodmare’.

‘We have a long way to go but you couldn’t ask for more from her at this stage of her career. I’m excited to see what she can offer over the next couple of seasons. She is another nice 3yo out of a good bunch we bought in 2015’.

Congratulations to al those involved – onwards and upwards!

The ‘PAN’ smashes them at Murray Bridge! from Dalziel Racing on Vimeo.