Vote for Mr Quickie in the ALL STAR MILE! 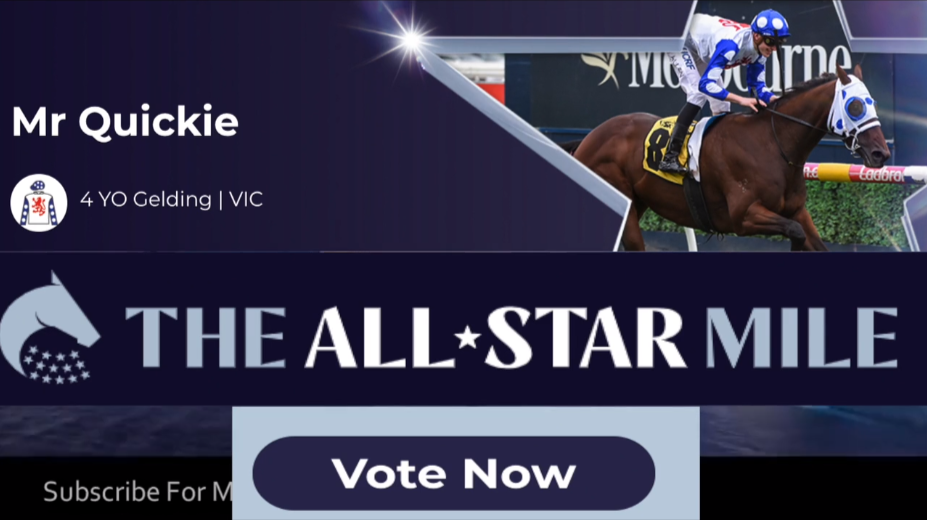 Ballarat thoroughbred syndicator Wylie Dalziel is confident group 1 winner Mr Quickie will attract enough public votes to get a start in the All-Star Mile at Caulfield on Saturday, March 14.

And he is equally optimistic that Mr Quickie, which has owners around Australia, can be a major player in the second running of the $5m feature.

Pakenham trainer Phillip Stokes is planning to run the four-year-old first-up from a spell in the All-Star Mile.

Dalziel, who operates Dalziel Racing, said Mr Quickie had an excellent first-up record with a first, second and third from as many attempts.

‘He’ll be jumping out of his skin.’

He said this was the longest spell Mr Quickie had had since launching his racing career in September, 2018.

Dalziel said he had gone to the paddock at the end of October with a lot left in the tank.

Mr Quickie was on Wednesday sitting in seventh place in All-Star Mile voting, with the top 10 to automatically secure a berth in the 15-strong field. Melbourne Racing Club will provide wildcards for the remaining runners.

Dalziel, who posted the first vote for Mr Quickie, said he had not taken a lot of interest in the voting process last year, but this time around was captivated.

He said Mr Quickie had been relatively slow to get going, sitting in the mid-teens early, but was building nicely.

Dalziel said he believed Mr Quickie could make his way into the top five or six by the time voting closed at 11.59pm on Sunday, February 16 – based on the gelding being a genuine winning chance.

Voters will automatically be entered in a random draw to represent their horse should it make the final field, with the winning ‘owner ambassador’ walking away with $250,000. ‘It’s a good reason to vote for him,’ Dalziel said.

Progressive voting will remain public on the All-Star Mile website until a blackout for the last two days from 10pm on Friday, February 14.