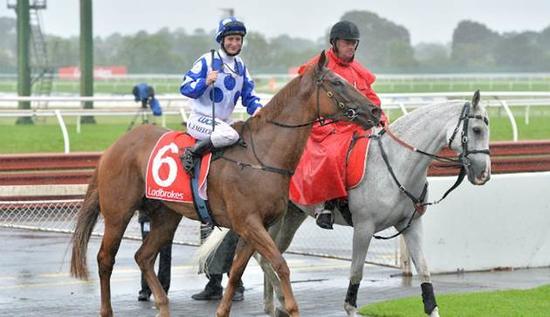 Miss Wonderland might not like hot weather but she has no problems with the rain and the mud after making a triumphant return to the track at Sandown on Saturday.

The Snitzel mare had not started since her unplaced effort in the Magic Millions race for three-year-olds on the Gold Coast in January where she was knocked around by the heat, but she found the conditions to suit on a worsening track at Sandown when she rattled home to nose out the hot favourite Sprightly Lass in the Sheen Group Handicap.

‘’She was unknown on soft ground but I had trialled her at Mornington in those conditions and so I was pretty confident she’d handle the conditions today,’’ trainer David Brideoake said.

Miss Wonderland had originally been trained by Ciaron Maher at Caulfield but made her way to Brideoake’s stables at Mornington in an attempt to help her recovery from heat stress.

‘’We’ve taken our time with her to get her to this stage and there’s been plenty of hard work behind the scenes but it is really pleasing to have a mare of this quality up and running and at this time of year as the autumn sprints come up pretty quickly,’’ he said.

Ridden by Linda Meech, the mare settled just off the speed but when Sprightly Lass skipped away on turning for home, she looked to be running for second. But Miss Wonderland ($4.80) kept coming and got the $2.10 favourite right on the line to win by a neck with $32 chance For A Song in third place.

More importantly, being a Snitzel mare, she is already stakes placed and Brideoake said he will chase more black type with the mare in the early part of 2018 with a view to hopefully getting the sprinter into a group 1 such as the Oakleigh Plate.

The Gold Coast however is unlikely after what happened earlier in the year. ‘’I think she might stay at home,’’ the trainer said.